The HRC blog highlights and contextualizes inspiring human rights and strategic nonviolent activism. Along with our curated library of tools and resources you can find on our website, we work to foster a community of practice and engagement within the field of human rights struggles by: 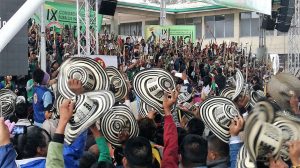 In December of 2016, the Colombian Congress officially ratified a renegotiated peace agreement with the Revolutionary Armed Forces of Colombia (FARC), bringing the armed conflict between the government and the nation’s largest guerrilla group to an end. The 52-year-long war caused the displacement of nearly 7 million individuals and lead to the deaths or disappearances…