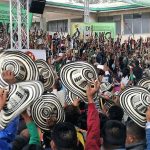 Reading time: 3 minutes In December of 2016, the Colombian Congress officially ratified a renegotiated peace agreement with the Revolutionary Armed Forces of Colombia (FARC), bringing the armed conflict between the government and the nation’s largest guerrilla group to an end. The 52-year-long war caused the displacement of nearly 7 million individuals and lead to the deaths or disappearances…